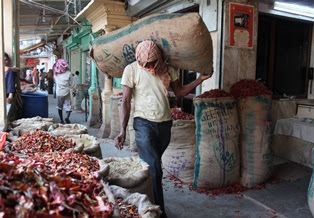 It is unfortunate that New Delhi is often known as the Indian capital of sexual violence and pollution, because on the contrary, it has some hidden treasures, like the Spice Market.
The bazaar of Khari Baoli, in the walled city, is one of the largest wholesale markets of spice in Asia and is operating since the last five centuries. 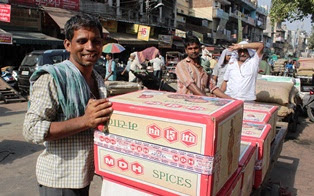 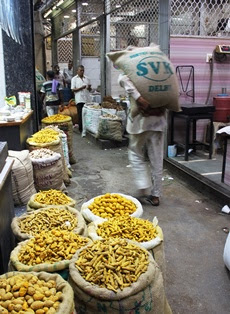 In this labyrinth of alleys and by-lines, you can see tons of spices, tea, dry fruits and medicinal herbs being loaded, carried and unloaded simultaneously by a multitude of ‘coolies', the tireless porters that evoke an image of India's colonial time. It is a walking down memory line.
Here and there some dried chilli peppers, ginger root or the yellow turmeric peep out from a pile of gunnysack loaded on the hand carts. Other bizarre roots, nuts, dried leaves or piece of unrefined sugar are displayed in small heaps on the floor. The air is full of different bitter and sweet aromas. It is allergic and after a while, your nose is burning.
Sneezing and coughing is the background while you are walking through the by-lines zig-zagging the coolies . Some of the spices are familiar like the cardamoms, nutmeg, coriander or anise, others are mysterious substance. The traders are happy to tell you the name in Hindi and in English and also to give some explanation. Usually, they have a culinary and a medical use, for example in Ayurveda. 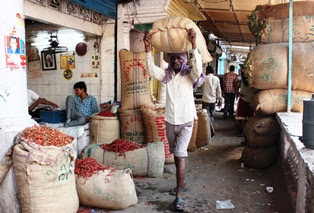 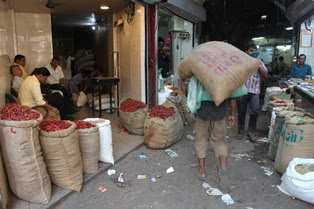 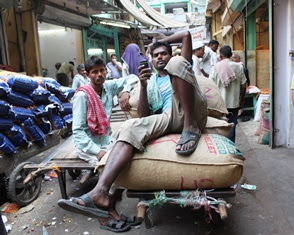 India is the biggest producer and exporter of spices since the mists of time. Of the 109 variety of spices, India produces and sells 79. The Romans, Portuguese and the British travelled on "spices route". The demand of black pepper, cloves and other luxury goods by Europe was the driving force of the colonization of India.
According to the president of the Kirana Committee Association, Bunty Gupta, around 2,000 traders work in Khari Baoli and most of them are in the sixth or seventh generation of merchants. Every day around 50.000 shopkeepers, porters and helpers go to the bazaar. The association is 100 years old, more than the independent India. 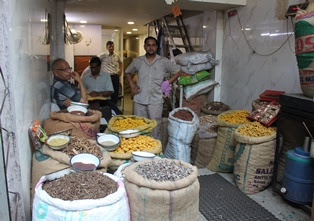 Recently I spent three days in the market going around with the camera in my hands. My preferred spot is Gododia Market. It is a three-floor commercial complex built by a wealthy merchant in 1920s. At the time it was a luxurious ‘shopping mall', now it is decrepit but still preserves its beauty. Here thousands of gunny bags are moved in and out the gates following some invisible orders. In a cloud of fine dust, the traders, lying on a white cotton mattress, are intent to write numbers on notebooks (only a few of them have a laptop). The walls are covered in orange stains from ‘pan', the chewing tobacco. The floor seems unclean since centuries. You can climb on the roof and enjoy a superb view of Old Delhi, mainly at the sunset. 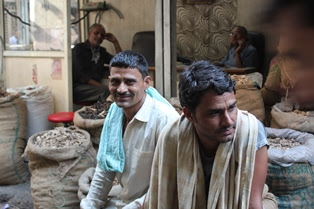 On one side there is Fatehpuri Masjid, a mosque built in 1650 by Fatehpuri Begum, one of the wives of Shah Jahan, the Moghul emperor who created the famous Taj Mahal, the monumental tomb of Agra city. The mosque is at the end of Chandni Chowk, the chaotic shopping street that is with the near Red Fort, the two main touristic spots of old Delhi. 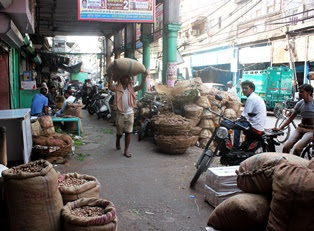 Recently the spice market of old Delhi is in jeopardy because the wholesalers want to relocate their business in a bigger and modern place with all facilities, like cold storage. They have already found a commercial area in Sonipat, in the state of Haryana, 50 km from New Delhi. They accuse the Delhi government of apathy because it has never fulfilled their request regarding godowns and warehouses to store their supplies.
In addition to that, the e-commerce is transforming the traditional wholesale business. The bazaar of old Delhi, like the ‘suq' in the Middle East, they are becoming obsolete. Some big traders in Khari Baoli already moved on the web. But the small ones are unwilling to change their traditional way to work. And they don't have not have enough resources to relocate. It means that this thriving and colourful bazaar has its days numbered. So hurry up to take the last glance of old Delhi. 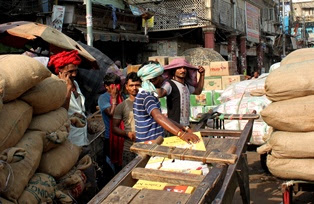 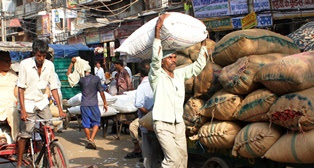 How to reach:
Khari Baoli market is in the old Delhi at the end of Chandni Chowk, behind a mosque called Fatehpuri Masjid. It is a walking distance from Chandni Chowk metro station. For guided tour look for Heritage Walks on the web or contact myself. 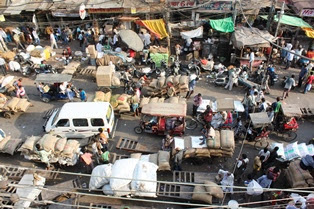 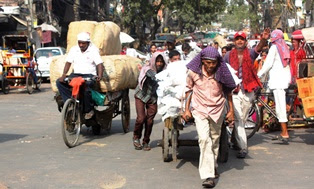 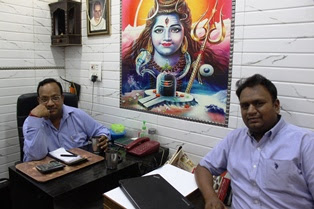