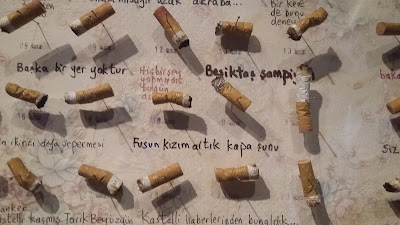 1/ Large national museums such as the Louvre and the Hermitage took shape and turned into essential tourist destinations alongside the opening of royal and imperial palaces to the public. These institutions, now national symbols, present the story of the nation – history, in a word – as being far more important than the stories of individuals. This is unfortunate, because the stories of individuals are much better suited to displaying the depths of our humanity.
2/ We can see that the transitions from palaces to national museums and from epics to novels are parallel processes. Epics are like palaces and speak of the heroic exploits of the old kings who lived in them. National museums, then, should be like novels; but they are not.
3/ We don’t need more museums that try to construct the historical narratives of a society, community, team, nation, state, tribe, company, or species. We all know that the ordinary, everyday stories of individuals are richer, more humane, and much more joyful.
4/ Demonstrating the wealth of Chinese, Indian, Mexican, Iranian, or Turkish history and culture is not an issue – it must be done, of course, but it is not difficult to do. The real challenge is to use museums to tell, with the same brilliance, depth, and power, the stories of the individual human beings living in these countries.
5/ The measure of a museum’s success should not be its ability to represent a state, a nation or company, or a particular history. It should be its capacity to reveal the humanity of individuals.
6/ It is imperative that museums become smaller, more individualistic, and cheaper. This is the only way that they will ever tell stories on a human scale. Big museums with their wide doors call upon us to forget our humanity and embrace the state and its human masses. This is why millions outside the Western world are afraid of going to museums.
7/ The aim of present and future museums must not be to represent the state, but to re-create the world of single human beings – the same human beings who have labored under ruthless oppression for hundreds of years.
8/ The resources that are channeled into monumental, symbolic museums should be diverted into smaller museums that tell the stories of individuals. These resources should also be used to encourage and support people in turning their own small homes and stories into “exhibition” spaces.
9/ If objects are not uprooted from their environs and their streets, but are situated with care and ingenuity in their natural homes, they will already portray their own stories.
10/ Monumental buildings that dominate neighborhoods and entire cities do not bring out our humanity; on the contrary, they quash it. Instead, we need modest museums that honor the neighborhoods and streets and the homes and shops nearby, and turn them into elements of their exhibitions.
11/ The future of museums is inside our own homes.