It is one of the neglected heritage of New Delhi, victim of the indifference and ignorance but also of an overcrowded city. The Armenian chapel and the annexed cemetery in Kishan Gunj, in the old Delhi, near a railways station with the same name, are the only surviving signs of the presence of a Christian community before the British, in the Mughal time.
There are the oldest Christian tombstones in New Delhi dating back to the XVIII century.
The place is under the authority of the Archaeological Survey of India (ASI) according to a sign board on the road. 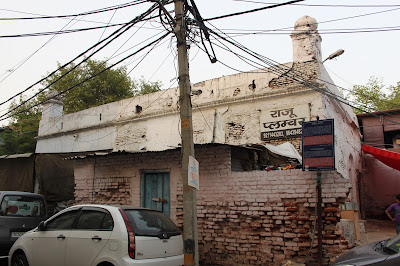 The chapel is now used by the Anglican Church (Csi) and a Mass is celebrating every Sunday.
Around 50 Christian families live in the buildings erected on the historical site.
Therefor the cemetery is presently ‘hidden’ in the courtyards and it is not directly accessible by the visitors.  But the residents are usually kind and allow you to enter in their houses.
A marble slab on the outside wall of the chapel reveals the presence of a cemetery. During my visit the slab was behind a cupboard in a room used by the Christians. A boy showed it to me after moving the piece of furniture.
The inscription reads:
“Armenian Cemetry (sic), Rama Park, Kishan Gunj, Delhi-6`` and then ``Trustees Armenian Association, 5 Outram Street Calcutta-16”.
It was made in 1962 in occasion of a visit of an Apostolic delegate of the Catholicos of all Armenians. Strangely it does not mention the chapel. 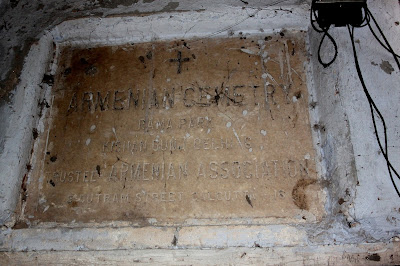 Very little is known about the history of the Armenians in Delhi. According to the website of the Armenian College and Philanthropic Academy of Kolkata, the oldest grave in this cemetery dates back to 1787. But nowadays there is no trace.
According to the old records, one `Father Stephanus was the priest in 1713`.
The same source informed that `during the sack of Delhi in 1739 by Nadir Shah, the marauding army devastated the city and only a small Armenian cemetery and the Martyr’s Chapel attached to it escaped destruction`.
In a paper on the Armenians in Mughal Delhi, published "Journal of the Society for Armenian Studies" 15 (2006): pp. 177-187, the Muslim scholar Omar Khalidi has shed some light on the history of the tombstones. Also gives a list of inscriptions with the translation, but almost all of them are disappeared. (see the list)
The `chapel` is known also as the mausoleum of Manuel D`Eremao (1744-1829), an officer of Portuguese origin who was at the court of Mughal and that was in charge of the Fort of Hansi.
His tomb, built in Mughal style, was at the centre of the cemetery and it is possible that it was the today `chapel`.  Even the cemetery is mentioned by different author as D`Eremao cemetery.
It is likely that the `Armenian cemetery` was in reality a graveyards for the many Europeans at the service of Mughals, like the old Catholic Cemetery in Agra.
But differently from Agra where the site is still preserved, the Delhi Christian cemetery was encroached after the Partition of 1947 with the huge influx of refugees from Pakistan.
In 2006, the researcher Omar Khalidi located 15 tombstones. The Armenian inscription were all disappeared, the one in Persian were no more readable.
During my visit I spotted three tombs, only one with a cross, in bad shape, in a courtyard full of utensils and flowers pot.